Whether you’re a mother, sister, leader of a troop, teacher, or whatever, it’s so important to be the person that you want to be. By doing so, you’re going to be confident, independent, and most of all, strong. One goal that many women share, regardless of their roles in life, would be encouraging young girls to be strong.

While society is still overwhelming against or not helping with creating strong female roles, women still have each other for uplifting. So how can you encourage girls to become strong, independent, and self-confident leaders of tomorrow? There are plenty of things that you can do actually! Regardless of your role, leadership position, and how you interact with them on a day-to-day basis, these are great tips for assisting in creating strong and leading girls.

Think about the pressures you’re putting on them

This is going to be strong depending on your role as every role is going to be different and the circumstances will be different as well. You need to think about the pressure that you’re putting on the girl and what they’re doing. You could be risking your teacher if they don’t fully understand why they need to do something unpleasant. But also you need to be careful with how this pressure affects them as it could potentially teach them that they don’t have the right to say no to others.

Tell them that it’s okay to ask for help

There’s nothing wrong with asking for help, but sometimes it is better if they fight their own battles. A part of being a strong and independent leader is knowing when to ask for help. All leaders know that they can’t handle everything that is thrown at them. While you’re teaching your daughter, student, troop, or whatever, let them know that they can still be strong and fierce while still getting assistance.

Teach them how to advocate themselves

Sometimes it’s better to let children fight out their own battles. This can be hard, especially if you’re someone who is a protector, like a mother. If you want girls to stand up for themselves as they get older, they need to take chances on themselves and stand up. This means proving herself and other wrongs. This is going to give her the power to let her know that she is not inferior.

Girls learn at a young age what is “meant” for boys and what is “meant” for girls. Toys are raising boys to believe that they can only play with cars and tools while girls can only play with dolls and kitchen equipment. These whole gender stereotypes need to be removed because it’s engraved in children’s heads at such a young age. Girls can have tea parties and play in the mud too. The same can be said for boys. Gender roles are only going to limit girls. Both boys and girls need to be taught and the most important pre-k math concepts should never be looked over. If standard education doesn’t have gender roles, why should everything else have these labels? They need to be taught that gender roles aren’t that to just ignore them.

This can be conflicting with older feminine leaders as “pink makeup-loving princesses” are only limiting girls and their abilities to become leaders. While everyone has their own opinions on the topic, it’s important to let girls have their interests. Some girls love makeup, princesses, and other feminine stuff while other girls detest it. Enforcing your interests or your opinions is not going to help at all. These girls are all individuals with their interests and personalities, so it’s important to never bring them down or have them question what they like.

Understand that positive role models can come from all genders

Girls indeed need to learn and surround themselves with powerful female role models. This will forever hold in creating the future leaders of tomorrow. However, there are strong male and other gendered role models and they also deserve to be recognized. This allows inclusivity and that all genders are in this together. This also allows for bonds to be created with the girl’s family members as well.

Never villainize a gender, while it can be easy to villainize men, no favors are being done by doing so. Equality is incredibly important and teaching girls about equality at a young age is going to allow for fewer strains between all the genders. Nobody is better than anyone else and everyone is equal, this must be taught. So by showing girls how there are wonderful role models that are not just women will allow them to have more to look up to and it lets them know that it’s okay.

Prepare girls for the unfair dynamics that they’ll have to face in life. It’s completely unfun but they must know that they’re up against a lot and they need to prepare for it. For example, when men are bossy it’s seen as admirable but if women do it it’s seen as unflattering. These double standards must be ignored and they should know that it should never hold them back. Allowing these girls to know what they’re up against Is going to allow them to think of the best way to respond.

There’s more to a person than just their looks

Outer beauty tends to get a lot of focus and the trend is only increasing over time. Thanks to social media, influencers, and societal pressure, there is a higher beauty standard for both girls and women, unfortunately. It’s so important to teach girls that there is so much more to a person than just their outer beauty. Inner beauty is so much more important. Remind girls that their best features are their personality traits, not their physical traits. The same can be said if you’re going to talk about a celebrity or anybody in a leading role, talk about their personality, not their appearance. Beauty is so much more than what’s on the outside and this must be taught to young girls.

Be the woman you want other girls to be

If you want your daughters, students, sisters, troop members, or any other girl to be a strong independent leader, you’ll need to be that person first. While you’re teaching these girls about strong women like Kamala Harris, you need to think about your strong traits too. This will allow you to demonstrate who you are so they can idolize you. If you’re wanting to teach young girls about strength, then you need to first find it within yourself. However, since you’re teaching girls, you need to apply these lessons to yourself as well.

Be proud of yourself because of where you are and the position that you’re in to help create strong leaders. Your voice can create an impact just like these little leaders. Recognize your work and they will be able to recognize theirs. Just like you tell them that they can achieve anything if they put their mind to it, the same thing applies to you as well. You are strong, you are confident, you are a leader, and you’re going to be a part of history that creates more future leaders.

Let them know that it’s okay to be angry

Emotions are just normal human traits, but with double standards that are present, angry females tend to be judged far more harshly. Getting judgment over negative emotions is only going to lead to anxiety or even repressed feelings. It’s important to teach girls that it’s okay to have difficult emotions and to teach them how to handle them. This also ties into reaching out for help. Kindness and compassion are wonderful and they need to be taught, but so does accepting negative emotions. 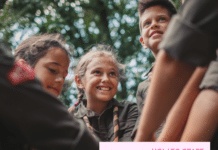 How to Successfully Start a Girl Scout Troop 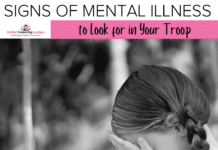 Signs of Mental Illness to Look For In Your Troop 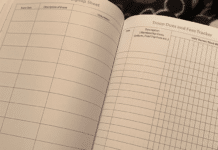 4 Great Ways to Plan and Organize Your Troop