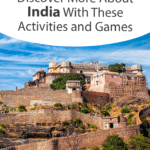 You can center your whole meeting around teaching the girls about India. I’ve included some general facts about the country.  Then beyond just the facts I have provided a pile of games, activities, fun patch suggestions, and other resources to make your event fun and educational.

Learn Everything You Can About India

Did you know? People in India greet each other by saying “Namaste” (na-ma-stay) which means “I bow my head to you.”

Geography of India: A large portion of India is surrounded by the Bay of Bengal, Indian Ocean and the Arabian Sea.  The Himalaya Mountains stretch along India’s northern border and countries around India are Pakistan, China, Nepal, Bhutan and Bangladesh. It is located in Southeast Asia.  The capital is New Delhi but the largest city is Mumbai

Animals in India:The Bengal Tiger is the national symbol of India.  Asian elephants, flying foxes, lions, tigers and peacocks are just a few of the animals.  There are over 1300 types of birds in India.

Economy in India: It’s the 5th largest economy in the world.  Agriculture makes up 45.5% of the workforce, followed by services at 34% and industry which account for 14% of the economy.  Currency in India is called a rupee.

Armed Forces in India:  The uniformed armed forces consist of the Army, Air Force and Navy.  The Coast Guard is an independent force in India.

Religion in India: Hinduism is practiced by 80% of the population.  Islam, Buddhism, Jainism, Sikhs and Christianity are also praciced in India.  Cows are sacred in India which means nobody eats beef. Cows are allowed to roam free in the country. Many people are vegetarians.

Education in India:  India has the largest national school system in the world with more than 700,000 schools.  Age 5 is preschool. Ages 6-10 is lower primary, ages 11-12 are upper primary, ages 13-15 are high school and ages 17-18 is high school secondary. The education system is sometimes called “10+2+3”system.  The first decade of the child’s education is mandatory. All kids must attend school until the age of 14, then they can decide if they want to continue with school or withdraw.

Food in India: Rice, lentils and breads are the main staples of food.  Indian food has lots of spices such as cinnamon, turmeric, coriander, cloves, chilli and anise.  Many foods are very spicy. Curry, vindaloo, samosas, roti, jaleli and lassi are just a few of the popular foods.

Recreation in India: Cricket, field hockey, polo, volleyball, basketball and skiing are some of the recreational activities.  Kite flying is popular with kite competitions and festivals. 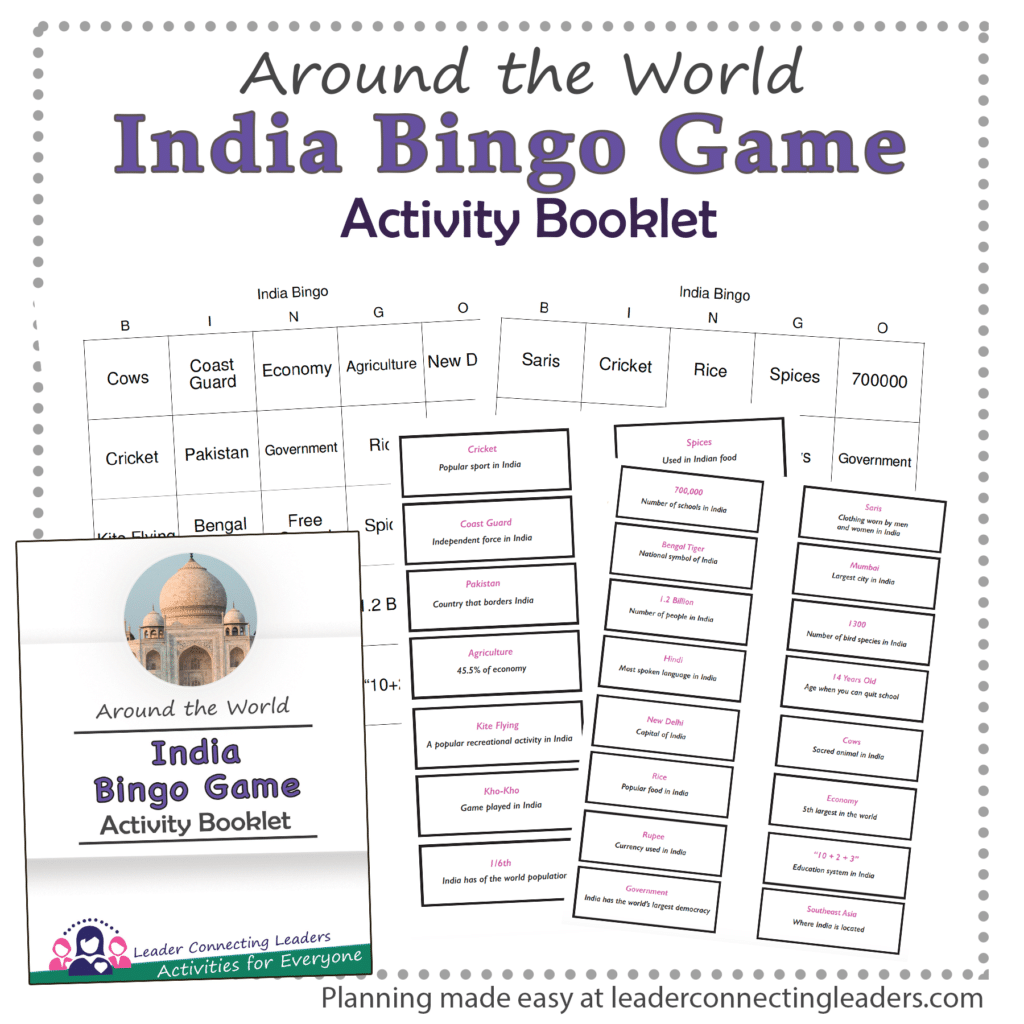 You may enjoy teaching your girls facts about India while playing a game of bingo. In this bingo game there are 24 different India facts your girls will learn about playing the game. When you draw a fact listed on the bingo cards you can also tell your girls a little bit about what each of them mean. After one game play again and have girls tell you what each fact means. Learn more and get your Bingo game to play with your girls.

Pitthu
Also known to many by the name Satoliya.  This is a simple and fun game where the players are divided into two teams.  A small stack of flat stones and a ball are the two things required in this game.  Each team takes their turns at toppling the stack and then they run while the other team has to hit/touch each of the players in the opposing team with the ball.  If the team that takes their shot at the stack manage to rebuild the stack before they are hit/touched by the ball then they win. Any player who is hit is out of the game.

Lattu or the spinning top
A popular game that is played in many parts of India.  It is a game that simply involves spinning a wooden lattu which has grooves in its lower half and a nail at the bottom to spin on.  A cotton string is wrapped around the grooves on the lower half and deploying it makes it spin.

Kho-Kho
A popular tag game of 12 players.  Teams are required to chase down and tag the players of the opposite team to win this game.  The chasing team sends nine players onto the field and they sit in a straight line with alternate players facing opposite sides, chaser have to make sure they catch the runners before the stipulated time which is usually around 9 minutes per inning.

Kancha
A game that is well known to kids in India.  This game involves the use of round glass marbles that are easily available at the neighborhood shops.  The object of playing Kancha is to collect as many as you can by striking the opponent’s marbles. They are several versions of this game.  Some are made up by the kids as they play.

If you love to get create pictures of your girls you could set up a photo booth with a variety of India type props to use in pictures. If you don’t have the time to gather your own. here is a great PDF printable with 42 great India photo props you can print and cut out and glue to sticks to use at your event. 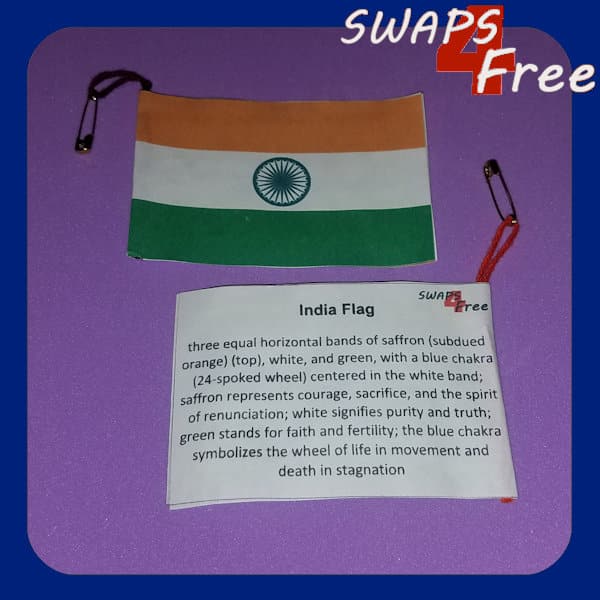 Bring all the facts the girls are learning together with these easy and free SWAP ideas related to India. All you need is a printer, scissors, hole puncher, beads, and safety pins to put together.  SWAPS4Free has a number of different variations of SWAP ideas for this country. Check them out here and get printables and directions to make yours with your troop. 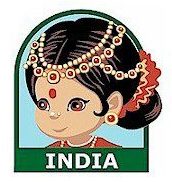 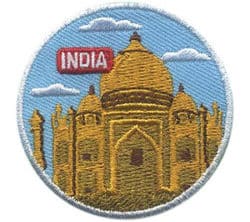 If this is still not enough India inspiration. Checkout my India Pinterest board where I share all kinds of other great ideas people have shared online for India that you can incorporate into your event.

I enjoyed learning more about India, I hope you did too.

Here are few other around the world ideas I have shared in the past that may be great for your event as well if you are doing more than just Egypt. 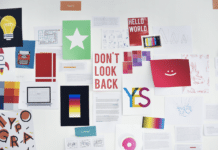 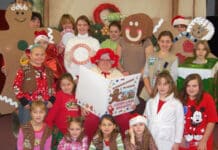