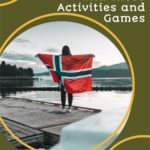 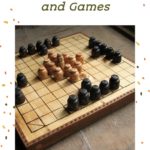 One fun thing to do with your girls is to teach them about another country. Everything from the people of the country, the weather, culture, food, and more. You can center an entire meeting around teaching girls about Norway. I’ve included some general facts about the country, and highlighted a few games, activities, craft suggestion, and other resources to make your meeting fun and educational.

Learn Everything You Can About Norway

Geography of Norway: Norway is located in Northern Europe and is situated above the Arctic circle and borders the North Atlantic Ocean and the North Sea. Norway is part of Scandinavia, with neighboring countries of Sweden, Finland, and Denmark. Norway is the westernmost country of the Scandinavian countries.

Norway contains about 50,000 islands off its rugged coastline. The coast is famous for its fjords, which are sea inlets between steep cliffs that were carved out by glaciers, as were the country’s mountains.

Where are the people in Norway? Norway has a population of 5.4 million people. Oslo, the capital city, contains just over 1 million inhabitants. Oslo is the only city in the country with more than 1 million people and is the third biggest city in Scandinavia. Most Norwegians live in the south of the country where the climate is milder than in the North.

Government in Norway: Norway is a Constitutional Monarchy with a king and a queen, which are very popular with the Norwegian people. King Harald V and Queen Sonia a son, Crowne Prince Haakon, who is married to Crown Princess Mette-Marit, and a daughter, Princess Märtha Louise. The royal palace is in Oslo and this is the main residence of the Royal Family.

Norway is divided into 19 counties called fylker (FEWL-ker). The king appoints a governor to each fylker. Each district also has a community council made up of elected officials. Members of Norway’s parliament, called the Storting (Stoor-TING), are elected every four years. Norwegian citizens aged 18 and older can vote in the parliamentary elections. The Norwegian government also has a cabinet made up of the prime minister and other elected officials.

Animals in Norway: In Norway, you will find reindeers, also called caribou. Arctic foxes also live in Norway. Foxes coat changes with the seasons- in winter the fur is mainly grey and white, while in summer it changes to a light brown. Wolverines live throughout the country as well, and the sea cliffs are filled with nesting birds, including puffins, cormorants, and gulls.in large colonies on cliffs.

Economy in Norway: Oil and gas were discovered off the Norwegian coastline in the 1960’s and are among the country’s main natural resources. Norway is one of the largest seafood producers in the world, and the second largest nation exporting seafood. Most of the country’s electricity is produced by hydropower plants. The biggest trading partners of Norway are Germany, the UK, the Netherlands, Sweden, and China.

The currency of the country is called the ‘Norwegian Krone’ (NOK), and is equal to 0.12 U.S. dollars.

Religion in Norway: Norway is composed of mainly Christians, with more than 70% being Evangelical Lutheran.

Language in Norway: The people in Norway speak Norwegian, which is a Germanic language. This language is very similar to the Swedish and Danish languages. Almost all Norwegians can speak English too, which is taught in schools as a second language.

The Norwegian alphabet is the same as the Danish alphabet, and has 29 letters.

Education in Norway: The Norwegian school system can be divided into three parts:

In primary and lower secondary, students have one shared curriculum. Upper secondary gives more freedom of choice – between vocational subjects and specializing in general studies. This forms the basis of their professional life.

Food in Norway: Here are some examples of Norwegian foods:

You may enjoy teaching your girls facts about Norway while playing a game of bingo. In this bingo game there are 24 different Norway facts your girls will learn about playing the game. When you draw a fact listed on the bingo cards you can also tell your girls a little bit about what each of them mean. After one game play again and have girls tell you what each fact means. Learn more and get your Bingo game to play with your girls.

One of the oldest games in the world and is similar to chess. The Vikings played this game to sharpen their minds for battle. The goal is to capture your opponent’s pieces before the ‘king’ reaches safety.

One of the rare breed of games with two unequal sides- The defending side consists of twelve soldiers and a king, who start the game in a cross formation in the center of the board. Their objective is for the king to escape by reaching any of the four corner squares.

The attackers consist of 24 soldiers positioned in four groups of 6 around the edges of the board.

All pieces move like the Rook in chess and pieces are taken by “sandwiching”- moving your piece so that an opponent’s piece is trapped horizontally or vertically between two of yours.

How to Make Board and Play Game

Just as the Vikings needed to be tough, many of Norway’s children’s games also require physical strength and agility.

Basse is a game with five or six players, who compete to keep a bag ball, called a basse, out of their designated region.

Players do this by knocking it out with any part of their body, except their hands, while also trying to hit it into another player’s area.

Each time it lands in their area, they receive a negative point.

Once a player reaches a certain number of points, they are eliminated.

When only two players remain, a sudden death round is played. The first person to hit the basse into their opponent’s area is the winner.

How to Play Basse

This game is similar to the London Bridge game, but in the Norwegian version, it ends in a tug-of-war battle.

As each child is caught by the falling bridge, they choose a side to go behind.

After all kids have been captured and have picked a side, they play a game of tug-of-war to determine the winners.

Learn how to make a Norway Flag Pin using these directions from MakingFriends.com

If this is still not enough Norway inspiration.

Checkout my Norway Pinterest board where I share all kinds of other great ideas people have shared online for Norway that you can incorporate into your event. I enjoyed learning more about Norway, I hope you did too.

How to Run a Car Wash Fundraiser with Your Troop 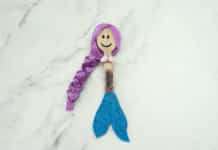 DIY Craft: How to Make a Mermaid Using a Wooden Spoon